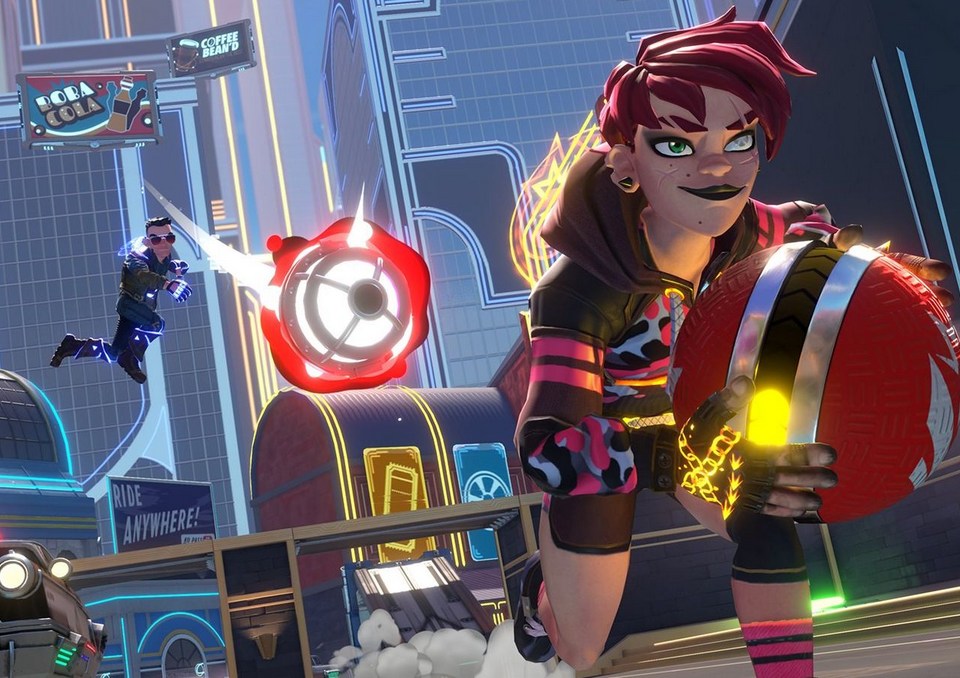 Knockout City will take you back to childhood games of dodgeball with a single sound: “whumphf!”

That one noise, which you’ll hear a lot as dodgeballs bounce every which way, represents just how well the game’s virtual version of dodgeball mimics the real thing — including all of the chaos you might remember from games on the playground.

In each match, you’ll scoop up dodgeballs littered around the city-themed maps and launch them at your unsuspecting targets. When you charge up a throw, the game automatically locks onto a target, meaning you don’t have to worry about precise aim. Knockout City is more about timing your shots to try to catch your opponent off-guard, which the game encourages by letting you do things like a curve or feint a shot to mix up your tactics.

Like in real dodgeball, though, a key part of Knockout City isn’t just throwing the ball, but also catching it, which you can do with a well-timed press of a trigger. And if you do catch a thrown ball, it will fly a little faster when you next throw it. I love trying to time catches. It adds Paper Mario-like timing to battles and forces you to think more about your positioning not just for offense, but for defense as well.

Knockout City also offers some fantastical elements that you won’t find in real-life dodgeball. Each match has a special type of dodgeball with unique powers, like a bomb ball that explodes on impact.

And at any time, you can turn yourself into a ball so your teammates can scoop you up and toss you at an opponent for a quick knockout. Be warned, though, your enemies can also pick you up when you’re in ball form, meaning they might just throw you off the map for an easy point.

Like real games of in-person dodgeball, there’s often a lot going on in Knockout City. That can make it easy to lose track of things and get knocked out by a shot you didn’t see coming. Knockout City matches are fun and chaotic. Dodgeballs flying left and right will keep you, your teammates, and your opponents in a thrilling dance of dodging, catching, throwing.

Knockout City isn’t just about outsmarting your opponents in dodgeball, though; the game also gives you lots of ways to customize your character, including the clothes they’re wearing and even your victory pose. You can earn more cosmetics from completing in-game challenges, leveling up your “street rank”, or by buying them from the Fortnite-like in-game store.

If you want to check out Knockout City, EA is offering the full version of the game for free until May 30th on every platform where it’s available, which includes PC, PlayStation, Xbox, and Nintendo Switch.

Knockout City supports both crossplay and cross-progression, so you can play with your friends no matter what platform they’re on and bring your progress over to other platforms. After the trial ends, the game will cost $19.99 — though if you have an EA Play or an Xbox Game Pass Ultimate subscription, you’ll have access to the game with one of those, too.